Who would have guessed that some of the best Native Indian artifacts & Native American Totem Poles are found at Cape Fox Lodge! Cape Fox Lodge is known for being one of the premier hotels and luxury restaurants in Ketchikan but what most people do not realize is that they also house a gorgeous, 6 Totem Pole circle outside, a Totem Pole and Totem Carvings inside the lodge, and a large collection of Native Indian artifacts such as tribal masks, Native American clothing, pictures of totem poles, jewelry, hand-weaved cedar baskets, tools, knifes, bentwood boxes, & more that are some of the best in Ketchikan! And the best part?! There is no cost to see this incredible collection! Even better!

Getting to Cape Fox Lodge is half the fun!

Cape Fox Lodge is located high on a hill overlooking downtown Ketchikan and is easily accessed from Creek Street, Married Man's Trail, or a longer walk up Venetia Way - all three which are found on the Downtown Ketchikan Walking Tour! The Cape Fox Funicular is found on Creek Street and provides a quick ride up to the Lodge for a small fee. (This fee is waived if you eat at the restaurant, FYI!) 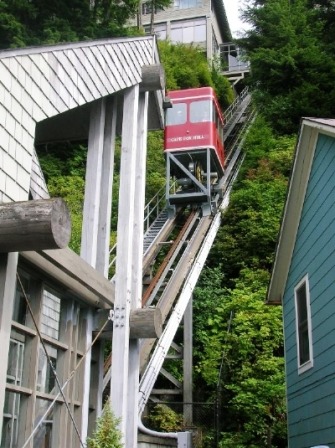 If the Funicular is not your style, you can walk just a few more yards along Married Man's trail where there is a staircase nestled among the trees that you can climb that will take you to the front doors of Cape Fox Lodge. Or last but not least, if you're in need of a little exercise after all the wonderful food from the Cruise Ship, you can walk up Venetia Way which will get your heart pumping!

This Totem Pole circle was created & carved by Lee Wallace. It has 6 Native American Totem Poles that stand in front of Cape Fox Lodge and represents the culture of the Northwest Coast peoples. These totem poles are often missed since they are not identified on the Ketchikan Walking Tour Map. Shhhh.....they'll stay our little secret! ;-) 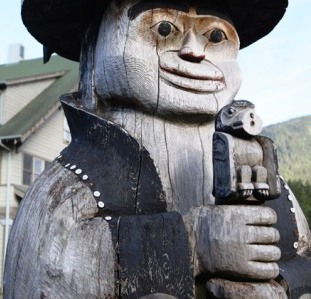 Located inside the lobby, to the right and left of the reception desk as well as up the stairs to the mezzanine level are countless Native Indian artifacts including Native Indian Masks, gorgeous beaded Native American clothing & jewelry, Cedar Baskets of all shapes & sizes, Bentwood Boxes, Tools & knifes that will simply amaze you! There are additional Native American Totem Poles and Totem Pole Carvings displayed among the lobby & on the walls.

A stop at the Cape Fox Lodge is the perfect addition to your Ketchikan Walking Tour and is a great place to see the finest Native American Totem Poles and Alaska Native Art in Ketchikan! But remember - it's our little secret! :-)

Home  |  Things to do in Ketchikan  |  Cape Fox Lodge Totems