Saxman Native Village is known for their collection of Native American Totem Poles, the largest collection of standing Totem Poles in fact, but that's hardly the end of it! There is a gorgeous Clan House, Native Carving Shed, Gift Shop, a short walk through the rainforest, and active eagles next just across the street. Saxman is one of the top Ketchikan Totem Pole Parks and is a must-see during your visit!

Download and print a map and details of the Native
American Totem Poles at Saxman Village here! 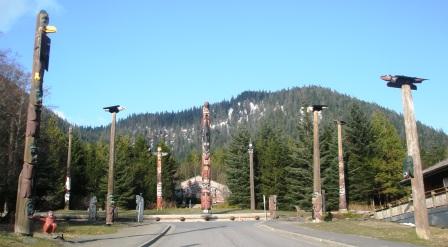 Saxman Native Village has so much to offer, it's hard decide what to write about first! When I first visited Saxman, I came to see the many Native American Totem Poles and learn their stories.

Arriving at the park, I paid my admission fee ($5) and set off on my own. There are 11 Totem Poles conveniently lined up along a street that dead ends to a cross street where more Native American Totem Poles (14 more) are located as well as the Clan House. I started at the main street and walked up towards the Clan House and checked out the Totem Poles first.

The Totem Pole Art is gorgeous. It still boggles my mind how they are carved by hand and I loved trying to figure out which animal was represented on the poles! It's not as easy as it may seem. The street that the Totem Poles are on display is on an incline with a paved sidewalk that was easy to walk.

The Clan House features a magnificent carving of a Beaver on the outside and inside are four carved house posts as well as another large panel carving inside the building.

Some tours also include a Native Dancing Show inside the Clan House. The show is interesting and ends with the visitors being able to join in on the final dance.

Outside the Clan House are two short, gravel lined, walking paths through the rainforest that surrounds the park. Along these paths are the native trees, shrubs, flowers, plants, berries, & more that is found in the rainforest.

One of these paths takes you across the street where you will find the carving shed on the premises with plexiglass windows where you can watch as Native Carvers work on current projects. Just across the street is a wonderful Gift shop with items ranging from T-shirts & keyrings to hand-carved Totem Poles, Paddles, & Ulus.

Here is a video of one of the Native Dancing shows:

**Please Note ** The Clan House Tour & Native Dancing Show is typically only offered on tours sold through the Cruise Ships. Independent Tours and walk-in visitors do not normally have access to these areas. Be sure to verify exactly what your tour includes!

If you choose to taka a taxi or walk to Saxman, ask inside the Gift Shop if you can join the Native Dancing Shows (they sometimes allow it!)

Download and print a map & description of the many Native American Totem Poles at Saxman Native Village.

Getting to
Saxman Native Village


Saxman Native Village is located approximately 3 miles South of downtown. There are several Saxman Native Village organized tours, you can take the Ketchikan Public Transportation (bus) which is about a 10 minute ride and costs $1 each way, take a taxi, walk, or even rent a car during your visit so that you may experience Ketchikan on your own!

Admission to the park is $5/person if you explore the park on your own. Be sure to download & print the map & description of the Totem Poles at Saxman Native Village before you go!


Native American Totem Poles are one of the top Ketchikan Alaska attractions and Saxman Native Village is one great Ketchikan Totem Pole Park in Alaska! Don't miss it! :-)

Home  |  Things to do in Alaska  |  Saxman Native Village