Native American Totem Poles are one of the most popular Ketchikan Alaska attractions and Pacific Northwest or Alaska native art. Ketchikan Alaska has the largest collection of totems found anywhere in the world – over 80 poles scattered throughout the city - from ancient poles kept in climate controlled protection, to standing poles raised almost a century ago, to more recently carved poles that reflect the continuing deep respect for traditional values.

Totem poles were not worshipped by the natives or considered religious in any way. They were built to tell stories, myths & legends and to commemorate events including births, marriages, anniversaries, death, or a shameful act.

The Totem Pole meanings are varied but there are 6 main types of Totem Poles, commonly commissioned by tribal leaders: 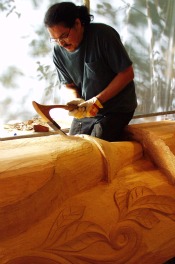 Native American Totem Poles in Southeast Alaska are most often carved from Western Red Cedar logs, which naturally repel insects (think of cedar-lined closets!) and curiously, rot from the inside out. Most Totem Poles are carved from a single log with only occasional additions being added separately - beaks, fins, etc.

When a Totem Pole is commissioned, the Totem Carver will design the pole on paper first. This allows the carver to know exactly how tall each of the figures will be, thus knowing how large of a log must be found to accommodate the carvings! When the log is received, the bark is stripped and the saproot removed, which is the first 1-3" of the log. Then it is allowed to dry. Once it is dried, the wood is very light & easy to carve - similar to Balsa wood.

The figures on a Native American Totem Pole must be inanimate objects and are typically either animals or mythological beings that symbolize a particular Native Tribe's history. It is impossible to 'read a totem pole' as the true totem pole meanings were only known to the Native Carver, the member who commissioned the pole, and those in attendance at the raising.

Totem Poles were never fully painted, only details that helped bring a figure to life were painted - ears, eyebrows, lips, & feet. The reason was that the paint was a very labor intensive process! The female tribal members would chew on salmon eggs and spit them into a bowl. The salmon eggs were the base to an oil-based paint, the saliva was the binding agent, and then powders were mixed to create the four main colors found on a Totem Pole:


Native American Totem Poles, to this day, are nearly 100% hand-carved. That means that no power tools are used to carve the pole other than some large initial cuts in the beginning by a chainsaw. This is what was so amazing to me! Every single mark on the totem pole is hand made. Imagine the dedication and talent required!

Totem Pole Carving was part of the Native culture long before the early 19th century. Before metal tools were introduced, they used wood, stone, bone, antler, beaver teeth, & shells to carve the totems. When the white settlers moved into the area they brought with them new metals which helped make the carving tools stronger & more durable. Still to this day, a Native Totem Carver's training involves creating their own tools including finding a tree or branch they can carve to use as a handle, forging the steel, sharpening the blade, & attaching the blade to the handle. 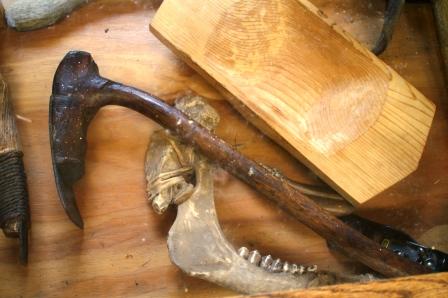 Two Totem Pole Carving Adzes - one attached to a bone

Native American Totem Poles are quite expensive, for the reasons I have mentioned above - being entirely hand carved, being carved out of a large log of red cedar, the time involved, and the experience of the carver. On average, a totem pole costs up to $3,000 per linear foot, not including the cost of the log. Smaller, decorative totem poles are available for purchase at the many gift shops in Ketchikan. These gorgeous Alaska Native Art pieces are the perfect souvenir from your visit to Ketchikan Alaska.

Home  |  Things to do in Ketchikan  |  Native American Totem Poles