An amazing collection of Native Art!

The Totem Heritage Center has the largest collection of unrestored 19th century totem poles, but that's just the beginning of what it has to offer! Also displayed are baskets, masks, regalia, carvings, and my personal favorite, the incredible photographs of the old villages where the poles were retrieved. Not to mention the many carvings and totem poles outside the building! This is one of the Ketchikan Alaska Attractions not to be missed!

Outside the Totem Heritage Center

I enjoyed every part of the Totem Heritage Center, especially getting there! I walked along the path identified on the Ketchikan Walking Tour Map, stopping at the Salmon Ladder, following Ketchikan creek as it meandered through town, arriving first at City Park and then crossing the short bridge over Ketchikan Creek where I saw salmon swimming in the stream below. I was greeted by signs, Totem Poles, & Native Carvings outside the museum, and even a short walk through a rainforest path around the museum. 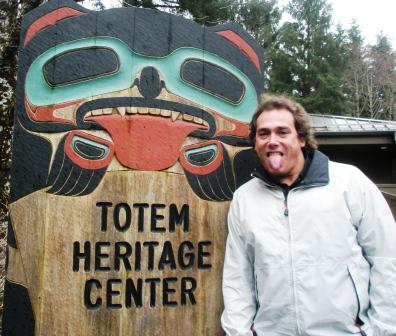 Goofing off in front of the Totem Heritage Center

Don't skip checking out all of the carvings on the outside of the building! When I arrived, I was immediately impressed with the two Totem Poles that were outside the building - the Frog Woman Pole and the pole called 'Honoring those who give' (read more about the poles below), the intricately carved entry doors carved to show the Sea Wolf (or Wasgo) and exit doors that depict a killer whale, and the five carved posts that represent the phraties of the local Native people: Eagle, Raven, Killer Whale, Bear, and Wolf. Two of these posts are on the entrance/exit area and are great photo spots! 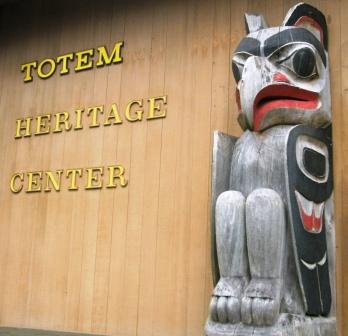 The entrance to the Totem Heritage Center

Inside the Totem Heritage Center

The Totem Heritage center is a small 3 room museum but is filled with fascinating information, exhibits, and photographs. Once inside, I was immediately impressed with five standing totem poles, each over 100 years old.  I was given a Brochure and allowed to take in the view until everyone was inside & situated. Then a narrator gave a detailed explanation of the five totem poles - the totem poles history, type of totem pole, and totem pole meanings. The narration lasted for about 10 minutes and then the group wandered through the 2 additional rooms at our own leisure. 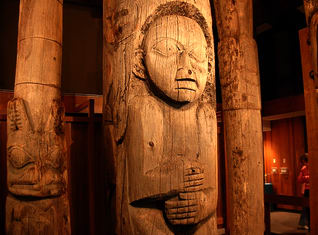 Totem Poles inside The Totem Heritage Center in Ketchikan Alaska

One of the two rooms is full of recovered Totem Poles (approximately 15 or so) each stacked in clear display boxes. The Totem Poles are in various stages of decomposition and most are missing most of their coloring but the figures are still recognizable. At each box is a plaque describing the pole and its characters. Many of these poles were originally carved in the mid to late 19th century and were in danger of being lost forever due to decay, vandalism, & theft before being rescued and moved here.

While the totem poles were interesting, what I found most impressive in this room was the fascinating photographs that lined the walls. They were taken before the Totem Poles were rescued and most are well over 150 years old.

The other room has exhibits that change during the year. When I was there I saw a handful of colorful tribal masks, a dug-out canoe, hand made baskets, button vests, and more. There are also exhibit cases surrounding the five standing totem poles that show Native arts & crafts, tools, and artifacts.

All in all, I spent between 30-45 minutes inside and it is easy to imagine it taking less time if you don't take the time to read all of the plaques & photographs.

Pricing and How to get to the Totem Heritage Center

The Totem Heritage Center is open 8am-5pm everyday from May through September and during the rest of the year Monday through Friday 1-5pm.

There are several Ketchikan Tours that include a visit here or you can tour the center on your own. It is located just beside City Park and is approximately 1 mile from the Cruise Ship Docks. I found it on the Walking Tour Map and walked there. Alternatively, you can take the Free 'Salmon Run' Bus which operates on a 20 minute loop from the Cruise Ship Docks and drops you off right in front of the Center.

Honoring Those Who Give Totem Pole 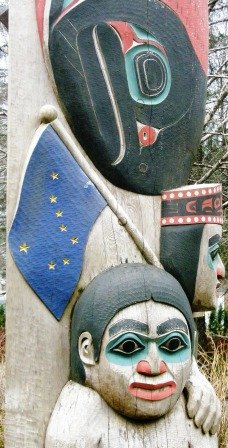 The Honoring Those Who Give Totem Pole

The Fog Woman pole tells the story of how salmon came to the people of Southeast Alaska. It was carved by Nathan Jackson in 1977.

The story goes...Long ago, Raven and his two slaves, Gitsanuk and Gitsaqeq, camped at the mouth of a creek to fish. Since Raven caught only bullheads, they began to paddle homeward. A fog came up and they were lost. Suddenly a woman appeared in the canoe, took Raven's Spruce Root Hat on her left side and all the fog went into it and they found their way back to camp. Raven married the woman called Fog Woman.

One day when Raven and Gitsaqeq were fishing, Fog Woman commanded Gitsanuk to fill a water basket. She dipped her fingers in the basket and a big salmon came splashing out. Gitsanuk clubbed it and they feasted on the first salmon. Raven discovered this and had Fog Woman create many salmon to fill his racks and storehouse. He became full of pride and spoke carelessly to his wife. They quarreled and Raven struck her.

Fog Woman threatened to leave if he still talked badly to her but Raven would not listen. As she left the house Raven tried to catch her but she slipped through his fingers like fog. All the smoked and dried salmon got up and followed her into the sea, leaving Raven holding a bullhead. Because fog woman produced salmon in a basket of fresh spring water, they return each year. At the head of every stream dwells Creek Woman, daughter of Fog Woman who guides all the salmon on their journey.

Home  |  Things to do in Ketchikan  |  Totem Heritage Center