There are 14 Native American Totem Poles, a gorgeous Clan House, & simply breathtaking beach & waterfront views at Totem Bight State Historical Park in Ketchikan Alaska. It is one of the top Ketchikan Alaska attractions and should not be missed!

My first experience with Totem Bight was on my own. I arrived at the parking lot, grabbed one of the Totem Bight Totem Pole maps and set off!

The Totem Pole Maps are color, printed brochure that are free, with a request for a donation, as it is a State park.

Click here for a map & description of all of the Native American Totem Poles at Totem Bight Park!


At the entrance of the park are beautiful gardens with indigenous plants & flowers. Funny enough, the ground cover is called “mother- in-law” because it gets into everything, eventually takes over, and is hard to get rid of. Hahaha!

There are two Native American Totem Poles at the Path entrance, a Thunderbird Whale mortuary pole and an Eagle Grave Marker. The Eagle Grave Marker is absolutely gorgeous, it's maybe my favorite Totem Pole in Totem Bight! The totem pole art that is featured on the front is just lovely.

The main path winds through a lovely rainforest area, and I enjoyed looking at all of the native trees, berry bushes, shrubs, devils club, & ferns. Be sure to look up as there is lots of mistletoe in the trees that has deformed the branches. It's very easy to identify as the branches look like witches brooms! 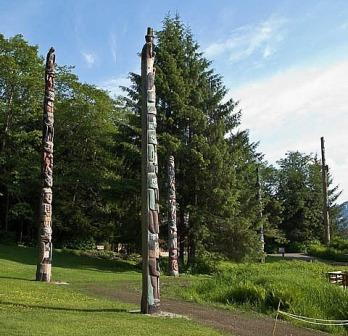 Just a few of the Totem Poles found at Totem Bight, a Ketchikan Totem Pole Park

Once at the end of the rainforest path, there is a large circle with 10 Totem Poles around the edge of a large clearing, with a clan house to the left. I started to the left as I was most excited to see the Clan House (or Long House). All along the path are informational plaques describing the History of Totem Poles, the Tools used, History of the Native Tribes in the area, details about the Clan House, and more.

The Clanhouse was open and I could climb around inside. It's fascinating to learn that 30-50 people lived in a house this size! Not in my family!! The snoring alone would be a deal breaker. haha... There are loose floorboards at the front of the house (opposite the opening) that were originally lifted up and is where the members of the tribe kept their belongings underneath. Simply amazing! And the handprints on the back of the house posts inside, like a 'Good Housekeeping Seal of approval", signifying that its construction is sound and suitable living for the clan. 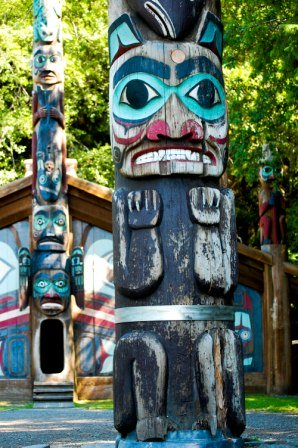 The view of the ocean is simply stunning from Totem Bight.  I even saw the Alaska mainland from here! On a clear day it's possible to see the Cleveland Peninsula from the wooden boardwalk. In fact there is even a pair of mounted binoculars that can be used to check out boats passing by, spot wildlife, or even see over onto Gravina Island.

But the best part of the wooden boardwalk is the much-coveted thimbleberry bushes (the best wildberry in Ketchikan!) between the boardwalk and the ocean. When they're in bloom you can walk on the beach and try to pluck some. They're very tasty!! 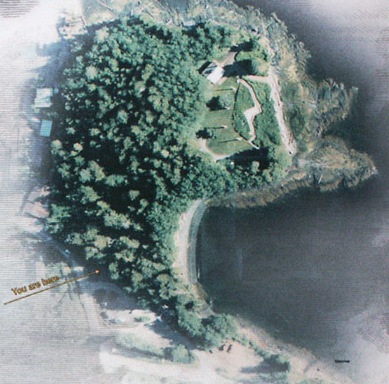 A view of Totem Bight from above

Totem Bight State Historical Park was originally created by the Civilian Conservation Corps during the Great Depression under President Roosevelt to create jobs. The remains of Native American Totem poles were collected by the CCC from abandoned native villages around Southeast Alaska and the Alaska Natives of the area were recruited to carve replicas of the poles. This project lasted until the start of World War II. The park was taken over by the State during statehood in 1959 and in the 1970’s handed to the Parks & Recreation Department and created as a National Historic Site. FYI, a "bight" is a shallow indent along a cove which looks like a bite has been taken out of a piece of land.

Getting to Totem Bight

Totem Bight is located approximately 10 miles North of Ketchikan. There are several tours & excursions that visit Totem Bight State Historical Park, you can take the Ketchikan Public Transportation bus, take a taxi, or another option is to rent a car during your visit so that you may experience Ketchikan on your own!

Unlike Saxman Native Village, a visit to Totem Bight is FREE (donation boxes are located throughout the park.