With over 80 Native American Totem Poles located in Ketchikan Alaska, it seems you can't go a few blocks without seeing one! Totem Poles are just one Ketchikan Alaska attractions not to miss! There are several totem poles located on the Walking Tour, which are detailed below. Also, be sure to make a stop at Cape Fox to see the Council of the Clans totem circle, the Totem Heritage Center for ancient poles kept in climate controlled protection, and the Southeast Alaska Discovery Center where you can explore exhibits on Alaska's peoples, public lands, & natural resources.

There are many Native American Totem Poles located in the downtown, historic district, many of which are identified on the Walking Tour Map. 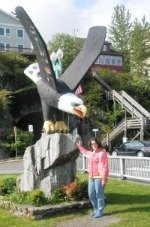 Located at the entrance to the famous tunnel, alongside Cruise Ship Dock 3, is a gorgeous, stylistic Eagle totem pole that was carved by Nathan Jackson of Ketchikan.

The name "Ketchikan" is believed to come from the Tlingit word "Kitschk-Hin" which means "thundering wings of an Eagle".

This is the perfect spot to pose for a photo with the Cruise Ships or Tunnel in the background! 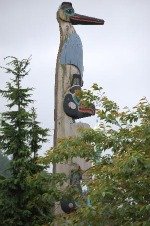 Legend says if you rub the belly of the bear you will enjoy the good fortune of being rich for a period of time! Now they don't say for how long so be careful passing by the jewelry stores! :-)

This Native American totem pole is the 2nd replica of the original pole raised in the late 1800's for the Tlingit chief who sold 160 acres to Mike Martin, whose fish camp and other business ventures led to the incorporation of the city of Ketchikan. The 1st replica is located inside the Totem Heritage Center.

Located just across from Whale Park near the entrance to Creek Street, the Chief Johnson totem pole stands 55' tall and is carved from a single western red cedar log!

This Story pole depicts the legend of Fog Woman and the creation of Salmon. This Native American Totem pole is a replica of a pole that honored the Kadjuk House of the Raven Clan, the fabled Kadjuk bird towering at the top of the Totem Pole. The original Totem pole was raised in 1901 where it stood until 1982. It can be found inside the Totem Heritage Center.

This replica was carved by Israel Shotridge and raised in 1989, a mere feet from it's original spot. When the Chief Johnson pole was raised, it was the first authentic totem pole to be carved & raised in downtown Ketchikan in over 50 years. The Chief Johnson replica was Israel Shotridge's first solo large scale totem. Many tribal elders & members came from throughout the Northwest for the raising and potlach feast and were treated to a traditional salmon dinner with dancing, speeches, & native adoptions.

Located in front of the Ketchikan Public Library, the Raven Stealing the Sun Totem Pole is a Native legend/Story pole. And just so happens to be My Favorite Native Legend!! 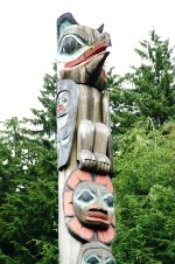 According to legend, the story is about an old chief & his daughter. It is said that the chief kept the sun hidden away in a box. Raven wanted to have this sun and had tried to get it many times without success. He noticed that the daughter went to the well every day for water, so he transformed himself into a pine needle, dropped into her water and was swallowed. She became pregnant and in due time Raven was reborn as the chief's grandson.

Raven became the old chief's favorite and let him have anything he asked for. One day he asked to play with the sun box, but he refused. Raven cried & cried and finally his grandfather let him play with it. Raven quickly took the box and rolled it outside. Then dashing the box to pieces, he took the sun in his beak and placed it in the sky, where it has been giving light to the world ever since.

Standing outside the Totem Heritage Center are two large totem poles, the 'Honoring those who give' pole and 'The Fog Woman Pole'. But also outside are five carved entry & exit doors and the five carved posts that represent Eagle, Raven, Killer Whale, Bear, and Wolf. The two posts on the entrance/exit area and are great photo spots!

The Southeast Alaska Discovery Center has so much more than Totem Poles! It was named one of America's Top 5 Educational & Historical Facilities! Filled with information, world-class exhibits, awe inspiring movie, and so much more! 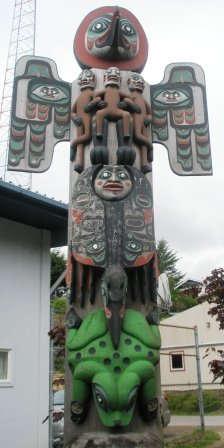 Located at the Robertson Building on the University of Alaska Southeast Campus on Stedman Street, on the Downtown Walking Tour, stands the Sun Raven Native American Totem Pole.

This totem pole is the 3rd replica of the original memorial pole carved in 1902 as a memorial for a woman's two deceased sons. This totem was carved by Israel Shotridge and raised in 2003.

The Sun Raven Totem Pole represents three legendary stories about Raven. The halo around Raven's head and the three dancing children represent Raven's escape from the great flood when his Uncle was trying to kill him. He spent time on the sun, playing with the Sun's sons (try saying that three times fast!). The next figure is that of Fog Woman, the subject of the Chief Johnson Totem Pole above, and at the bottom of the pole is Raven and a Frog. The frog represents Raven's time exploring the bottom of the sea to see the many strange sights after the flood.

The 1st totem pole raised in Saxman Native Village was the original replica of the Sun Raven Totem Pole and still stands today.

Personal Poles in front of houses on Stedman Street

While on your walk down Stedman Street, a privately commissioned Native American totem pole appears in front of a house near Thomas Basin. This personal Totem pole features the three watchmen up on top, an eagle, a raven, and a man with a talking stick. And just across the street are a couple more Totem Poles on the lawn of another private residence. 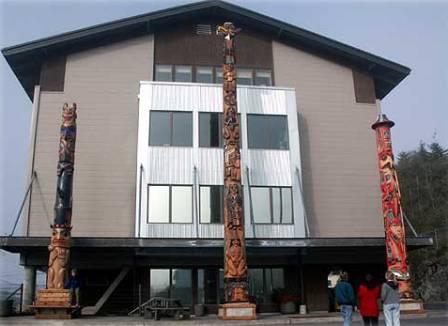 The Tsimshian Totem Pole is 25’ tall and was carved by David Boxley. It features the carver's interpretation of three legends: The Shaman Who Defeated the Ghost Chief; Killer Whale’s Battle With the Giant Octopus, and the Eagle and the Young Chief, topped off with three Tsimshian figures representing health, education and the future of our youth.

The Tlingit pole is 40’ and was carved by Israel Shotridge. At the base of the pole is a bent wood box with ravens on each side of a human. Above the box is a human figure depicting the cedar bar weavers. This goes up to the woman and child with traditional regalia, above that is the weaver weaving a chilkat or raven’s tail robe. The figure above this is a carver carving a mask. The healing hands in a circle are above the carver followed by the speaker. On top are an Eagle and a Raven with human faces in the wings representing clans of human spirit.

The Haida pole is also 25’ and was carved by Donald Varnell. It depicts a Shaman at the base linking its tongue to Raven transforming into Property Woman. The tongue may have been the direct means of transferring power or story. The Raven is then thought to be transforming into Property Woman. The eagle is possibly transforming into a more humanoid form. The three Watchmen on top are shown speaking to the Eagle which in turn transfer information all the way back down to the Shaman. Finally the one hat design represents KIC as one united tribe.

Ketchikan Alaska is simply filled will gorgeous Native American totem poles, some of the best Alaska native art available. Whether enjoying them on a free Walking Tour, a Totem Pole Park tour, or visiting the many Museums in Ketchikan, you will not be disappointed!

Home  |  Things to do in Ketchikan  | Native American Totem Poles